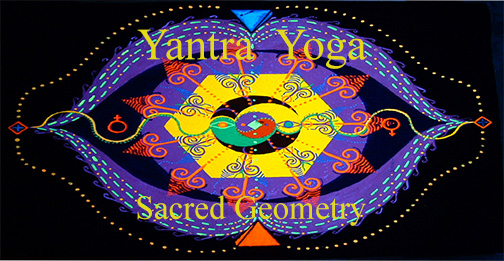 The science of Yantra Yoga is the study of sacred geometry as it unfolds in the universe, visible in a variety of natural phenomena like the spider’s web, or spiraling shells.

Yantra Yoga is a complex system of geometry and mathematics which assigns values to the forces that make up the universe. These forces can then be mapped out as mathematical formulas and geometric patterns such as those seen in crystals, snowflakes and flowers. In the human world, those who have become aware of these patterns expressed it through sacred geometry in the temples of various cultures. The entire cosmos is unfolding as a growing mandala – a concentric geometric pattern, flowing outward to the extremities of the universe.

As the electromagnetic energies of the stars come back in and converge at various angles they condense and create the manifest world we perceive with our senses. Generally we cannot directly perceive this energy, but with modern scientific technology it can now be observed and measured. Many Ancient cultures learned to perceive this energy through the use of Plant Medicine.

Through the practices of concentration techniques known as Dharana in Yoga, the inner vision is carefully developed and one may see the vibrant energies (before they are modified by the mind) as geometric patterns. Concentration, visualization and contemplation are a vital component of traditional Yoga and part of our Yoga Teacher Training system of empowerment.

This science explains the chakra forces as they are manifested in the geometry of the world around us, and how they alternately revolve through the cycles of time.

The chakras are universal forces of electromagnetic waves which make up the ocean we are swimming in, immersed in, and very much part of. These are termed “waves of possibilities” in modern quantum physics; once you become conscious of their reality, you can learn to direct them for a better manifestation of health, life or state of consciousness.

The recently published “Quantum Revelation” explains the science behind this possibility. Documentaries like “What the Bleep” and various others are available on YouTube.

Yantra is the intellectual form of yoga which brings in mathematics and geometry to lay out a map of the human mind in relation to the chakra energies.

The frequencies of these electromagnetic waves is measured in time cycles which is the number of waves in 1 second of time, or, the length of 1 wave which is the distance from the peak of one wave to the next. This is the raw physics with no connection or known effect on human beings.

Below are a couple of yantra mandalas depicting Sri Yantra, one of the geometric patterns seen by millions of “seers” over the centuries, and considered a sacred figure in Indian culture.The multiple triangulation is a mathematical reality of the cosmic mind, coning up through many cultures. 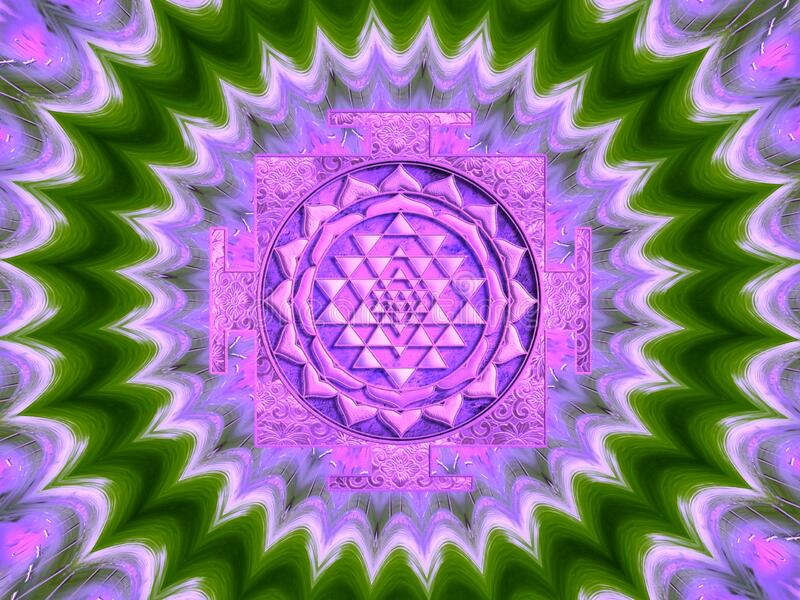 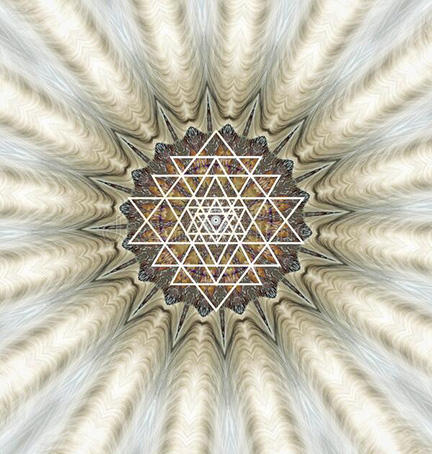 In the mandala below, the symbol for Ajna Chakra we can find the lost and hidden language of geometry, known to secret societies like the FreeMasons, not so secret organizations like the Vatican, as well as many old cultures from the Mayan to the Egyptians pyramid builders. Ajna chakra is the element of MIND, just above the elements of ether, air, fire, water and earth.

In this multiple symbol artwork we see the shape of an eye, the central pupil of which is the Yin Yang indicating duality and opposites. There is one swirling clockwise, and inside that one swirling counter-clockwise. Around that is the six sided orange figure representing the reticular activating system, a working function within our minds that helps focus our attention one thing while other perceptions go to the subconscious. The seven double spiral shapes within that orange hexagon stand for the psychic senses mapped out in the yogic science, the higher intuitive realms of perception that have been denied by Western science until recently. To the outside of that but within the purple circle are eleven other senses with which we experience the world outside of ourselves. the wave going through the center indicates that underlying all perceptions is the wave like quality of all energy giving us these sense perceptions, which are interpretations of the energy. Plus a diagram of magnetic fields – which make up the matrix containing all energies. Mind IS the central web that holds it all together, and through mind we are all connected. The two large petals stand for the left and right hemispheres of the brain. 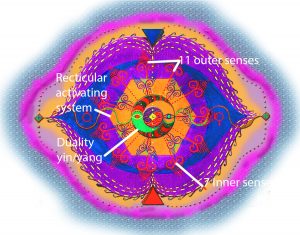 The point of this Sacred Geometry (Yantra), is to bring us to the realization that there are zillions of electromagnetic waves invisibly crisscrossing in every cubic centimeter of space right in front of our eyes. They cross at every conceivable angle creating a matrix of geometry which forms the source of the molecular world. We cannot see this electromagnetic ocean any more than a fish is seeing the water in front of its eyes. But it can see the other fish in the water.  Just like we don’t see the air we are breathing but we can see right through it to all the other objects in our environment. WE, are swimming in a matrix of energy, of which we see only a few materialized objects. Modern science in the field of quantum physics is stating that this is a reality, energy that can be detected and measured, yet scientists do not know how to access it. Within the sacred geometry of Yantra Yoga lies the secret wisdom about the angles of entanglement which manifest the reality we can perceive, shaped out of the total matrix of this ocean of invisible energy. Remember that there are zillions of these energy waves – waves which in quantum physics they regard as “waves of possibilities”.